With the Surround formula, detergent molecules in water will form micelles that rapidly emulsify oily phase soils and suspend the often times oil covered particulate soils in the cleaning solution. You can read more about micelles further down in this article.
Here is a product demonstration video, by the manufacturer, Bonnet Pro.

Our chemistry is uniquely designed to lower the surface tension of the water rapidly and efficiently so that the cleaning phase happens faster. Once the soils are emulsified and suspended they can easy be removed using an absorbent pad and or left in place to be removed by future routine vacuuming.As Surround’s T2H Polymer’s residual chemistry dries, the suspended and emulsified soils along with the detergent molecules become locked inside of our unique polymeric structure. Think of the shell on an ‘M&M’. The action of the chemistry plus the scrubbing of the pad and or bonnet breaks the soils in sometimes-smaller particles and separates the soils or foreign substances from the fiber giving you the instant clean look while suspending them in our encapsulating polymer. Once the detergent along with the soils are locked in our polymeric structure the detergent molecules “quit” cleaning, preventing rapid resoiling.

The polymeric structure is a relatively brittle film that will not allow the residual soils to reattach to the fiber surface due to their hardness and low surface tension. This is what also eliminates wicking in most situations. We have chosen to use a more durable hard film. It will not instantly sheer or break off like other formulas. This more durable hard polymer also reduces or eliminates any chance of air borne particulate issues and provides longer protection from particulate soil. All while allowing residual soils and the polymeric encapsulant to be removed by routine vacuuming. 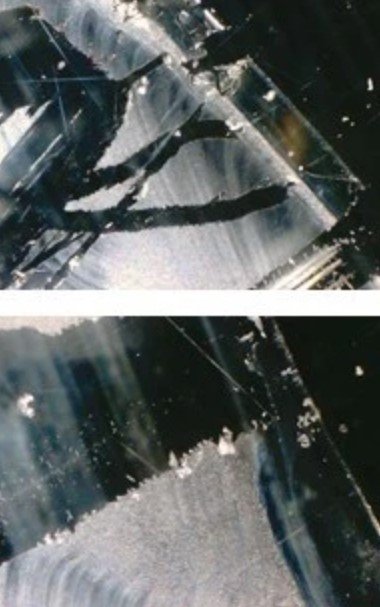 As you can see in the picture Surround goes on as a film and under external forces (in this case a finger nail) breaks away or shatters. Surround was mixed at 8oz per gallon. As fluids tend to puddle like on this slide. The frosted appearance would indicate a puddeling on the horizontal glass or in other words an accumulation of cleaning solution that would be thicker than on a vertical carpet fiber. That explains the frosted appearance. The clear section nearer the edge would be more accurate of the coating of polymer film left on carpet fiber. Surround dries clear giving your carpets a bright clean appearance. As you can see Surrounds encapsulating polymer doesn´t just fall off. This secures the encapsulated soil better and provides longer lasting carpet protection.

Carpets will appear to get even cleaner over the first few cycles of vacuuming as the residual soil is released and more light can penetrate the fiber surface. A very thin layer of the polymeric material is left behind on the fiber surface and will continue to protect the fiber long after the initial cleaning and over many cycles of further routine vacuuming. When the thin nearly monolayer film is finally removed over time the carpet will begin to resoil at the same rate as if it had never been cleaned. Surround is also unique as our chemistry will “rewet” and allow itself to be wet cleaned away during subsequent cleanings preventing any buildup of the chemistry.

Micelle A micelle is an aggregate of surfactant molecules dispersed in a liquid colloid. A typical micelle in an aqueous solution forms an aggregate with the hydrophilic “head” regions in contact with the surrounding solvent, sequestering the hydrophobic tail regions in the micelle center. The shape and size of the micelle is a function of the molecular geometry of its surfactant molecules and the solution conditions such as surfactant concentration, temperature, ph and ionic strength.

When surfactants are present above the CMC critical micelle concentration they can act as emulsifiers that will solubilize a compound normally insoluble in the solution being used. This occurs because the insoluble species can be incorporated into the micelle core, which is itself solubilized in the bulk solution by virtue of the head group’s favorable interactions with the solutions species. The most common example of this phenomenon is detergents, which clean poorly soluble hydrophobic material such as oil, grease or dirt that cannot be cleaned by water alone. Detergents also help clean by lowering the surface tension of water making it easier to remove dirt from the fibers surface. The emulsifying ability of surfactants is also the basis for emulsion polymerization.

I would also like to point out that Surround will stay usable when mixed with water for a week or more. Some encaps when mixed with water will go sour or rancid after just a couple days making the mixed solution unusable thus wasting money. It not only has a great cleaning strength and smells good, there is no coughing when using this product.

It may be wise for you to stay clear of companies that can’t explain encapsulation or that do not relate their sales info to carpet cleaning. Many companies give examples of applying chemical full strength in a glass. Since we are in the carpet and fiber cleaning industry and not the food service industry, I think that this is a poor example and a bit of smoke and mirrors. Surround is different, it is better, it is truly the Art of Encapsulation!

Your Jones Multi Clean technician will pass several times in different directions to ensure the carpet fibers are cleaned in all directions. Next, we will scrape your carpet with a stiff carpet rake to lift the fibers into their upright position. If you had heavy traffic areas or your carpet became flattened, this process could help restore the appearance and comfort of your carpet’s fibers in that section.

Please send us a quick message, we will get back to you shortly. For emergencies, please call: